Directions: In this section, you are going to read a passage with ten statements attached to it. Each statement contains information given in one of the paragraphs. Identify the paragraph from which the information is derived.

You may choose a paragraph more than once. Each paragraph is marked with a letter. Answer the questions by marking the corresponding letter on Answer Sheet 2.

A.There is still great uncertainty about the impacts of climate change，according to the latest report from the Intefgovernmental Panel on Climate Change，released today.So if we are to survive and prosper, rather than trying to fend off specific threats like cyclones，we must build flexible and resilient(有弹性的)societies.

C.The latest report backs off from some of the predictions made in the previous IPCC report，in 2007.During the final editing process.the authors also retreated from many of the more confident projections from the final draft，leaked last year.The IPCC now says it often cannot predict which specific impacts of climate change—such as droughts，storms or floods——will hit particular places.

D.Instead，the IPCC focuses on how people call adapt in the face of uncertainty,arguing that we must become resilient against diverse changes in the climate.“The natural human tendency is to want things to be clear and simple.”says the report’s co-chair Chris Field of the Carnegie Institution for Science in Stanford，Califomia.“And one of the messages that doesn’t just come from the IPCC，it comes from history,is that the future doesn’t ever turn out the way you think it will be.”That means，Field adds，that‘'being prepared for a wide range of possible futures is iust always smart”.

E.Here New Scientist breaks down what is new in the report，and what it means for humanity’s efforts to cope with a changing climate.A companion article，“How climate change will affect where you live”，highlights some of the key impacts that different regions are facing.What has changed in the new IPCC report?

F.In essence，the predictions are intentionally vaguer.Much of the firlner language from the 2007 report about exactly what kind of weather to expect，and how changes witl affect people，has been replaced with more cautious statements.The scale and timing of many regional impacts，and even the form of some，now appear uncertain.

G.For example，the 2007 report predicted that the intensity of cyclones over Asia would increase by 10to 20 per cent.The new report makes no such claim.Similarly,the last report estimated that climate change would force up to a quarter of a billion Africans into water shortage by the end of this decade.The new report avoids using such firm numbers.

H.The report has even watered down many of the more confident predictions that appeared in the lcaked drafts.References to“hundreds of millions”of people being affected by rising sea levels have been removed from the summary,as have statements about the impact of warmer temperatures on crops.“I think it's gone back a bit，”says Jean Palutikof of Griffith University in Brisbane，Queensland，Australia，who worked on the 2007 report.“That may be a good thing.In the fourth [climate assessment]we tried to do things that weren’t really possible and the fifth has sort of rebalanced the whole thing.”

So do we know less than we did before?

I.Not really,says Andy Pitman of the University of New South Wales in Sydney,Australia.It is just more rigorous language.“Pointing to the sign of the change，rather than the precise magnitude of the change，is scientifically more defensible，”he says.

J.We also know more about what we don’t know,says David Karoly at the University of Melbourne.“There is now a better understanding of uncertainties in regional climate proj ections at decadal timescales(时标).”

Are we less confident about all the impacts of climate change?

K.Not quite.There are still plenty of confident predictions of impacts in the reponv—at least in the draft chapters that were lcaked last year,and which are expected to be roughly the same when they are released later this week.These include more rain in parts ofAfrica，more heatwaves in southem Europe，and more frequent droughts in Australia(see“How climate change will affect where you live”).It also remains clear that the seas are rising.How do we prepare in cases in which there is low confidence about the effects of climate change?

L.That’s exactly what this report deals with.In many cases，the uncertainty is a matter of magnitude，so the choices are not hard.“It doesn’t really matter if the car hits the wall at 70 or 80 kilometres an hour,”says Karoly.“You should still wear your seat belt.”So when it comes to sea.1evel rise or heatwaves，the uncertainty does not change what we need to do：build sea walls，use efficient cooling and so forth.

M.But in some cases——such as African rainfall，which could go up or down——the models are not giving us great advice.so all we know is that things will change.“We are not certain about the precise nature of regional change，but we are absolutely certain there are going to be profound changes in many regions，”says Pitman.Even then，there are things we can do that will always help.A big one is getting people out of poverty.The report says poverty makes other impacts worse and many suggested adaptations are about alleviating it.The IPCC suggests giving disadvantaged groups more of a voice，helping them move when they need to and strengthening social safety nets.

N.What’s more，all countries should diversify their economies，rather than relying on a few main sources of income that could flood or blow ovel Countries should also find ways to become less vulnerable to the current climate variability.That means improving the way they govem resources like water,the report says.

O.In short，we must become more resilient.That would be wise even if the climate was stable.Our current infrastructure often cannot deal with the current climate，says Karoly,pointing to events like the recent UK floods.“We don’t have a resilient system now,even in extremely well developed countries.”

46.Focusing on the clue of climate change instead of the severity of climate effects is scientifically more reasonable.

47.IPCC’s new report has removed some of the predictions that appeared in the former one released in2007.

48.One of the lessons both IPCC and history has taught us is that future never appears as you expect it to be.

49.The IPCC’s latest report has weakened many firmer projections written in the leaked drafts.

50.The first of IPCC’s three instalments has focused on the current climate conditions and the main reason for those conditions.

51.The most important thing for us to do is to get people rich.

52.Sometimes the uncertainty is just about the extent of climate effects，thus the choices.of what we should doisquite easy.

53.Countries must make their economies varied and improve the way of controlling the recourses in order to beRer deal with climate change.

54.The new IPCC report has replaced some more confident statements from the 2007 report with more careful expressions.

55.There are still many of firm statements about the climate effects in the new report，which are generally the same as they were in the draft chapters. 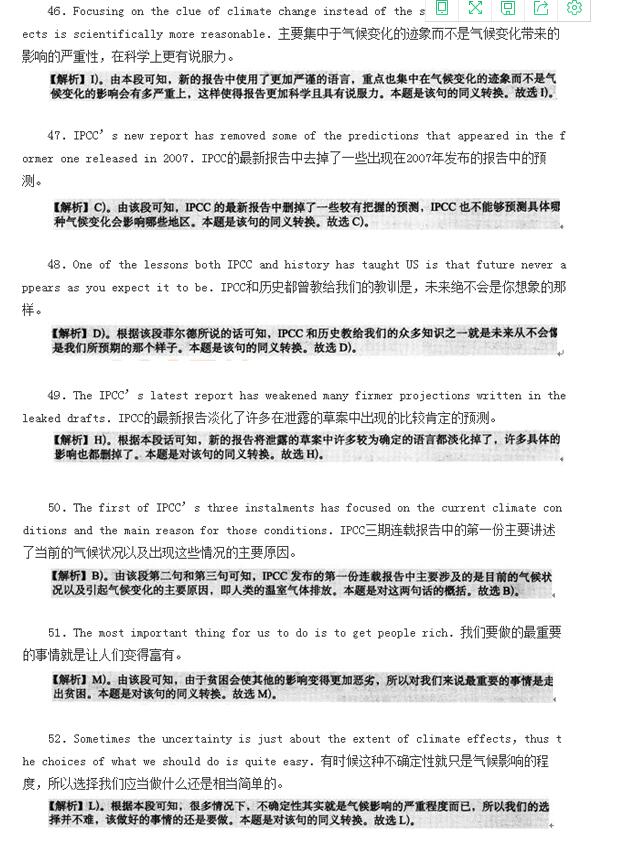 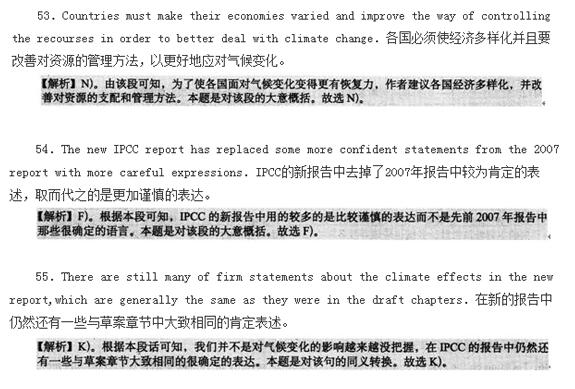